Following on from my recent post on going from arts student to data scientist, I wanted to get more data on what companies were saying they wanted from data science applicants in terms of higher education.

I started off by scraping the general job site Indeed for jobs matching “data scientist” in London. This gave me 4,178 job descriptions. However, I did a bit of cleaning before analysing these; taking out duplicates reduced it to only 888 records. As an extra check, I made sure the job titles included the works “data scientist”, to avoid analysing roles that were adjacent, perhaps involving working with data scientists, but not actually in that specific career. This means some other data science jobs will have been excluded (for example, ones that lead with machine learning in their job title), but it should cover a range of experiences. The actual job titles in the final set of 316 jobs include things like Junior Data Scientist, Lead Data Scientist, Senior Data Scientist and just Data Scientist on its own, as well as variations indicating specific fields.

I then labelled the data, using regex as an aid but manually going through all the jobs because it wasn’t a particularly large dataset and there was a lot of variation in language used to describe requirements. This is what I found.

Approximately half the job descriptions explicitly wanted somebody with a degree

That’s 49.4% of job descriptions saying a degree is required, and a further 4.1% expressing a preference for it. To be clear, this doesn’t include ads that asked for degrees or equivalent experience - only ones that had them as a stipulation or clear preference. This is probably a conservative figure because some of the job descriptions were very short and the longer ones on the employer’s own website or application portal might have offered more detailed requirements.

Only a small subset of degrees are normally of interest

In most cases, STEM subjects were specified, but this goes down to quite particular detail. There is a subset of STEM subjects that get a lot more love, which includes computer science, maths/statistics, physics and engineering. And occasionally, only those with actual data science qualifications would allegedly make the cut.

There were a small number of cases where a degree was required but not the subject area was not specified. My assumption as a job hunter would be that this means ‘relevant’ degree, but of course there are plenty of jobs outside of data science where a degree is supposedly required regardless of its pertinence to the role. On the surface, this works for people like me - after all, I have a degree - but seems totally arbitrary, and highlights the need to hire for ability rather than qualification. 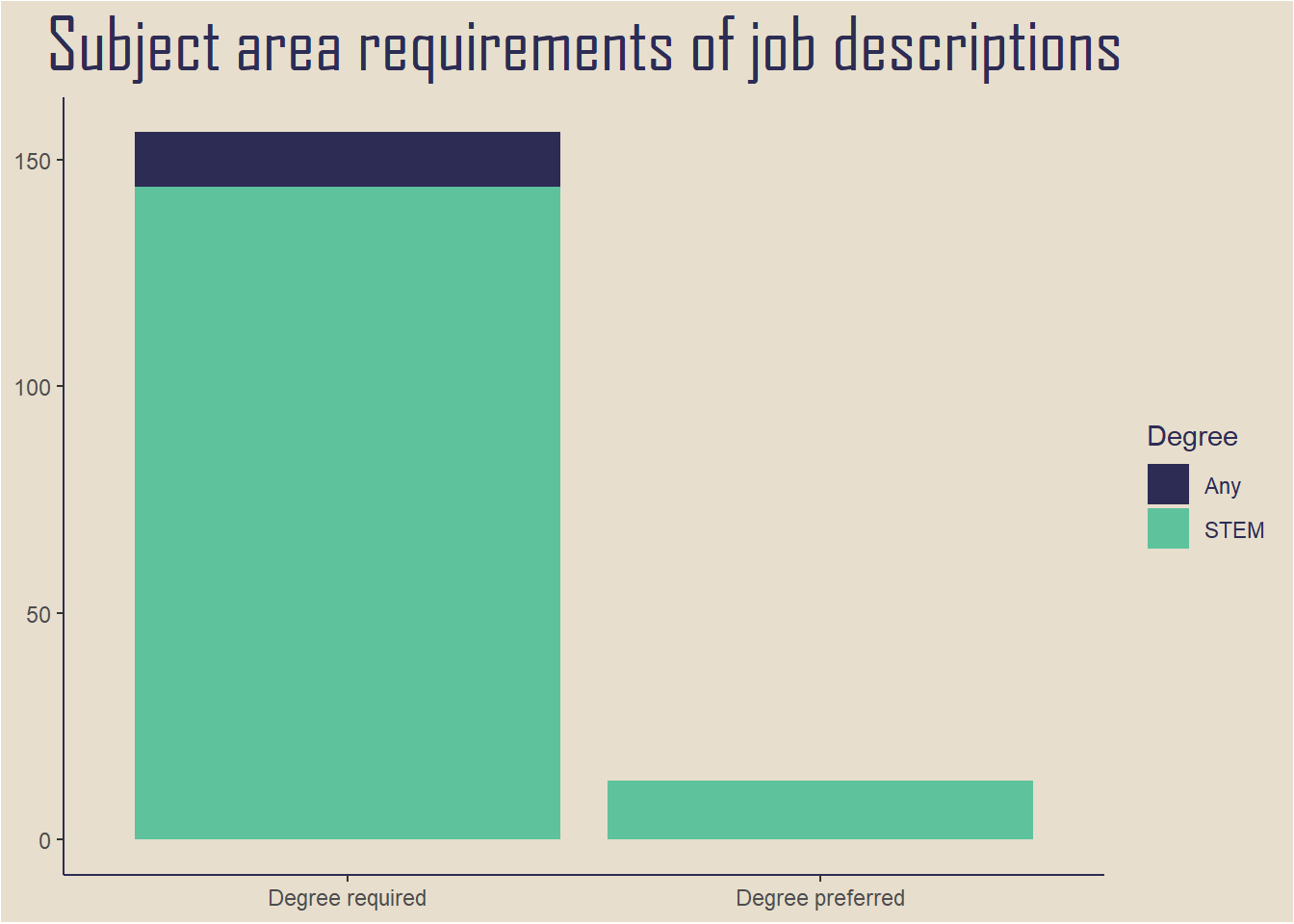 A degree is good but a Masters is better

A lot of the jobs that wanted somebody with a degree were happy with a STEM BSc, although many didn’t explicitly specify the level they wanted. However, 60.4% of job descriptions from employers after applicants with degrees wanted a Masters or a PhD. 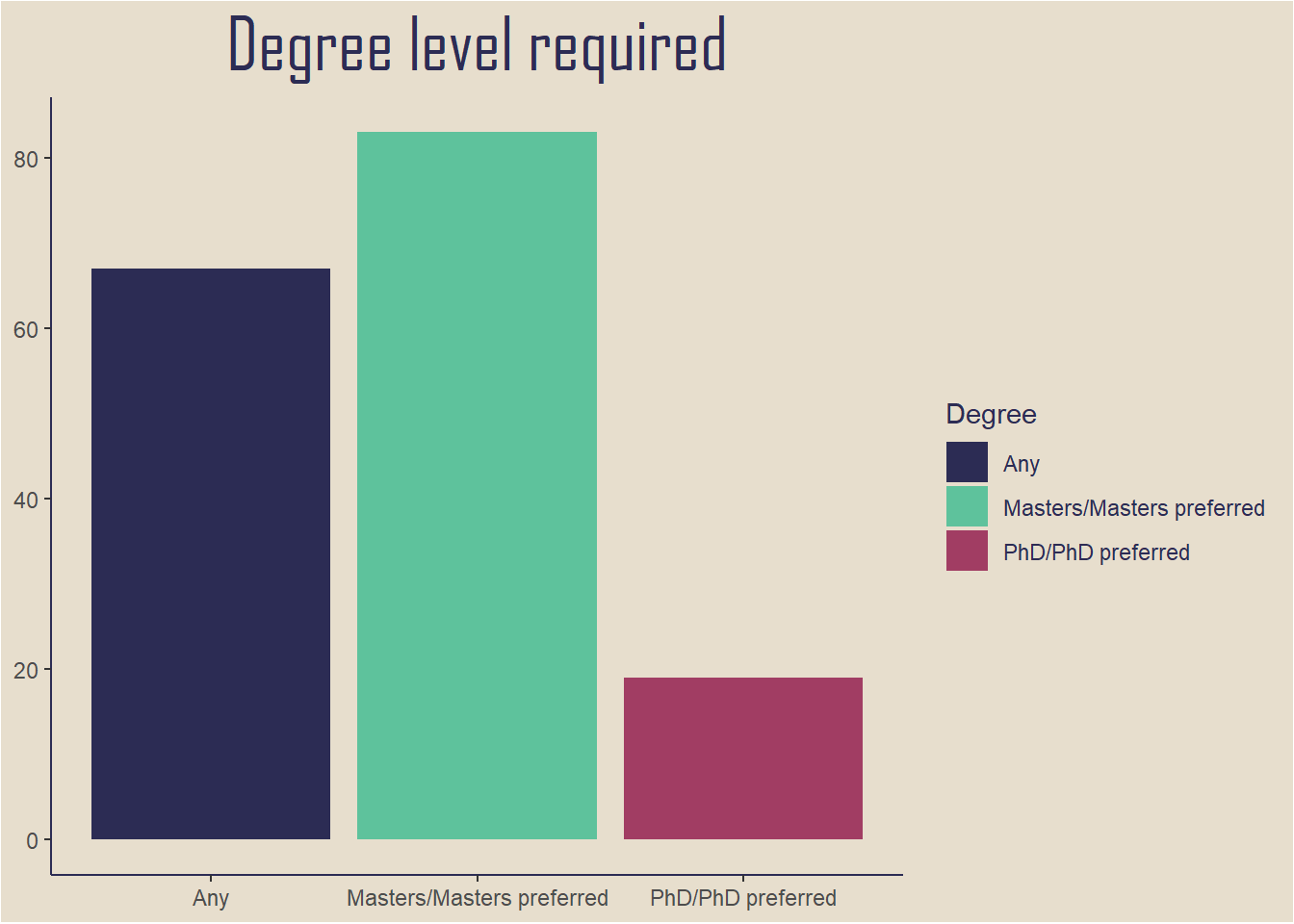 Why does this matter? Is this just a heads up that everyone interested in a data science career should go to university for 3-10 years if they don’t currently have a STEM degree? Unsurprisingly, that’s not my stance. My next post will go through why I think a degree requirement is a problem, and what employers should do instead.

Going from arts student to data scientist But are degrees actually required for data science?
comments powered by Disqus