Looking at job ads for data scientists, half of them specify they want you to have a degree. At least, that was what I found looking at jobs based in London posted on Indeed, which I covered in my most recent post.

Why does this matter?

For a lot of employers, it is surely a no brainer to put an academic requirement into your data scientist job description. It’s a technical area! It requires statistical prowess, or at least competence! Surely it is the minimal expectation that your data scientists have STEM degrees? And I bet this is exacerbated when the person writing the job description isn’t a data scientist or is a bit unfamiliar with the field; it feels safer to at least have that nailed down. But there are a few reasons why this isn’t a great approach.

Lacking a degree doesn’t mean someone lacks the required skills

There are other ways to get the skills you need as a data scientist. I built my stats up by working in social research, a field that didn’t require me to have a STEM subject to get on a trainee scheme, but where there were plenty of opportunities to get familiar with the more maths-y side of things if it turned out you were interested in that. At the same time, I was working with data and research design every day. As for coding and more advanced data science knowledge, I used online courses and resources to get to a point where I was a viable candidate, doing my own projects to demonstrate my capabilities. There are SO MANY excellent resources in this area that it is unquestionably possible for somebody motivated to apply themselves and get sufficient knowledge to start a career in data science.

This is particularly true because if somebody decides they are interested in a data science path at any point after 18, the barrier to getting a STEM degree is high. Taking a career break to go to uni, or switching your academic path late on, are very serious steps that would take a number of years. The relative novelty of data science as a mainstream career means that many people interested in it will not have been planning for it since their teen years, and will by necessity be finding other ways to get the skills they need. With the high demand for data science professionals, it makes sense to broaden our view of where good data scientists can come from.

What really confuses me is seeing job ads that ask for a STEM degree while also asking for a few years of experience working as a data scientist. If I’ve been earning my living with the same job title, isn’t that at least as suggestive as a STEM degree that there’s a chance I’ve got some relevant skills?

Having a degree doesn’t mean someone has the required skills

I’ve spoken to a lot of data scientists with STEM backgrounds for whom data science was just as novel to them as it was for me when they started out. Even people with data science masters have said they learnt more practical, useful stuff within a few weeks of an actual data science job - academia can sometimes feel far removed from what you do in the real world.

But that’ll be even more true for people who’ve been out of uni for a while. I remember going on an R training course before I started working as a data scientist. I was the only person in the room without a STEM degree, which made me quite worried at the time. It turned out I was more comfortable with the stats required than a lot of my coursemates because I had used the skills in my job, whereas they hadn’t really needed them for a decade or more.

OK, OK, I know it’s unlikely the sole requirement on the job ad, and you hopefully are doing something to check these applicants have the skills you need. But given you need to do that anyway, why make the degree the requirement, rather than the skills?

Different backgrounds are good for a team

One of the exciting things about data science is coming up with new ways of looking at a problem. It’s almost a truism to say that people with different life experiences will come at things differently. That applies in a lot of areas, not just academic background - hire diverse teams!

The impact on hiring will be gendered

The thing is, I don’t think the argument for diverse teams is all about better performance. I think the real argument is that it’s the right thing to do. Our workspaces should reflect the world, and if they don’t we should ask serious questions. What is certainly obvious is that if you insist on specific STEM qualifications, you will be hiring from a group of people with dramatic demographic imbalances.

Figures were release for the 2018/19 higher education enrolment in the UK just a few weeks ago. 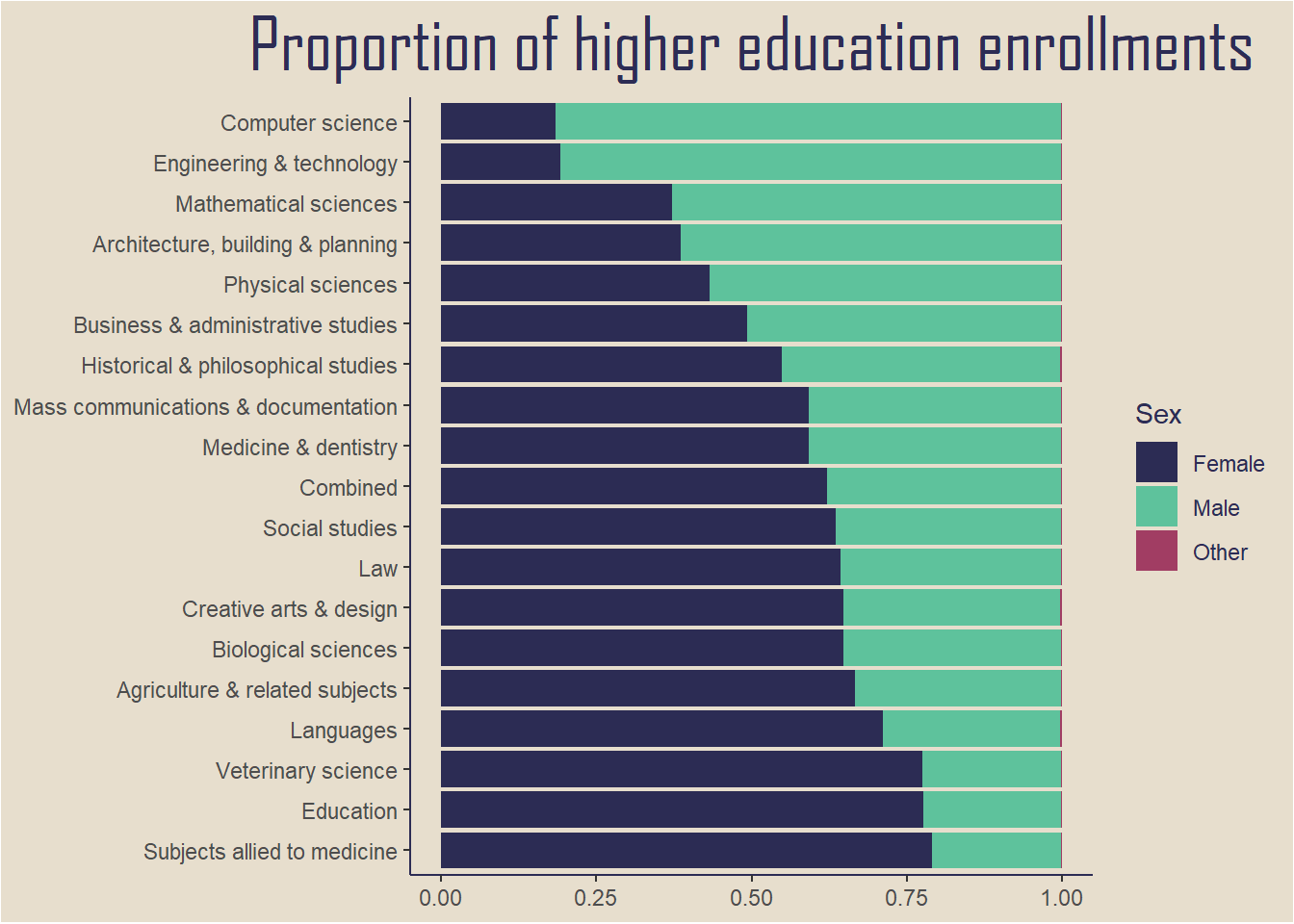 You can see how substantial the differences are. Women are in the minority for the key STEM subjects that employers particularly asked for: physics (where they make up 43.3% of the enrolled students), maths (37.2%), engineering & technology (19.1%) and, in particular, computer science (18.4%).

It’s not good enough to see these disparities, and I would love to see more women studying STEM and more men in the arts and humanities. There are some great initiatives to encourage more girls and young women to take STEM subjects at higher levels and I think those should be strongly supported. But at the moment, and probably for quite a while into the future, potential applicants who are women are less likely to have degrees in computer science or maths. Employers who are serious about tackling the gender gap in data science and tech should absolutely rethink what their actual requirements for the job are.

You don’t mean it

All of this is all the more frustrating because so much of the time, things required in a job ad turn out not to be set in stone. My personal experience shows me this - I’ve had interviews and job offers from companies that have set out a degree requirement I don’t meet. Yet plenty of people would immediately count themselves out if they don’t meet a requirement like this. After all, it’s not subjective: you either have the degree or you don’t. So we have a disconnect between the perceptions of job seekers (“this is an absolute minimum to get an interview”) and recruiters (“we want to hear from people who would do a good job; a degree is just an easy way to demonstrate that”).

I’ve already given advice to job seekers coming from unconventional backgrounds, including to ignore the exact requirements if you think your skills are up to it. But really, I would love to see a big change in how data science roles are recruited.

Recruit for skills and potential, not just one way of doing things. STEM degrees are absolutely one way to evidence competence in relevant areas, but more so based on what was actually learnt and what projects were done and how that applies to the job. Experience and other ways of learning are also evidence of relevant skills, so ask for the skills and then interrogate the evidence the candidate has them. Honestly, it’s what you do anyway - you’re looking for people who you believe will do the job best - so just word it in a way that is more encouraging to people who don’t have the traditional academic background.