With my Fringe Roulette app, I shared my love of the Edinburgh Fringe with you. I was there for a week in August, and actually used my app to find one of the shows I saw! It was a Taiwanese dance piece called Floating Flowers that I would never have picked out, but that I found incredibly enchanting and hypnotic. I’m delighted I went, so I think Fringe Roulette was a total success.

Although I’d love it if everyone going to the Fringe tried out something random and spontaneous, in reality, a lot of us rely at least partially on reviews. Now that the Fringe is over for this year, I’ve decided to take a closer look at the review data.

On the Fringe website, people can leave reviews of shows they’ve seen. Usingrvest, I scraped the audience reviews of everything from this year. After some data cleaning, I ended up with over 9,000 reviews for about 4,000 shows, which I then reduced down only to shows that had run over the full period, which I defined as at least 19 performances.

Not all shows are reviewed equally

First, here’s a histogram of the number of reviews across shows. 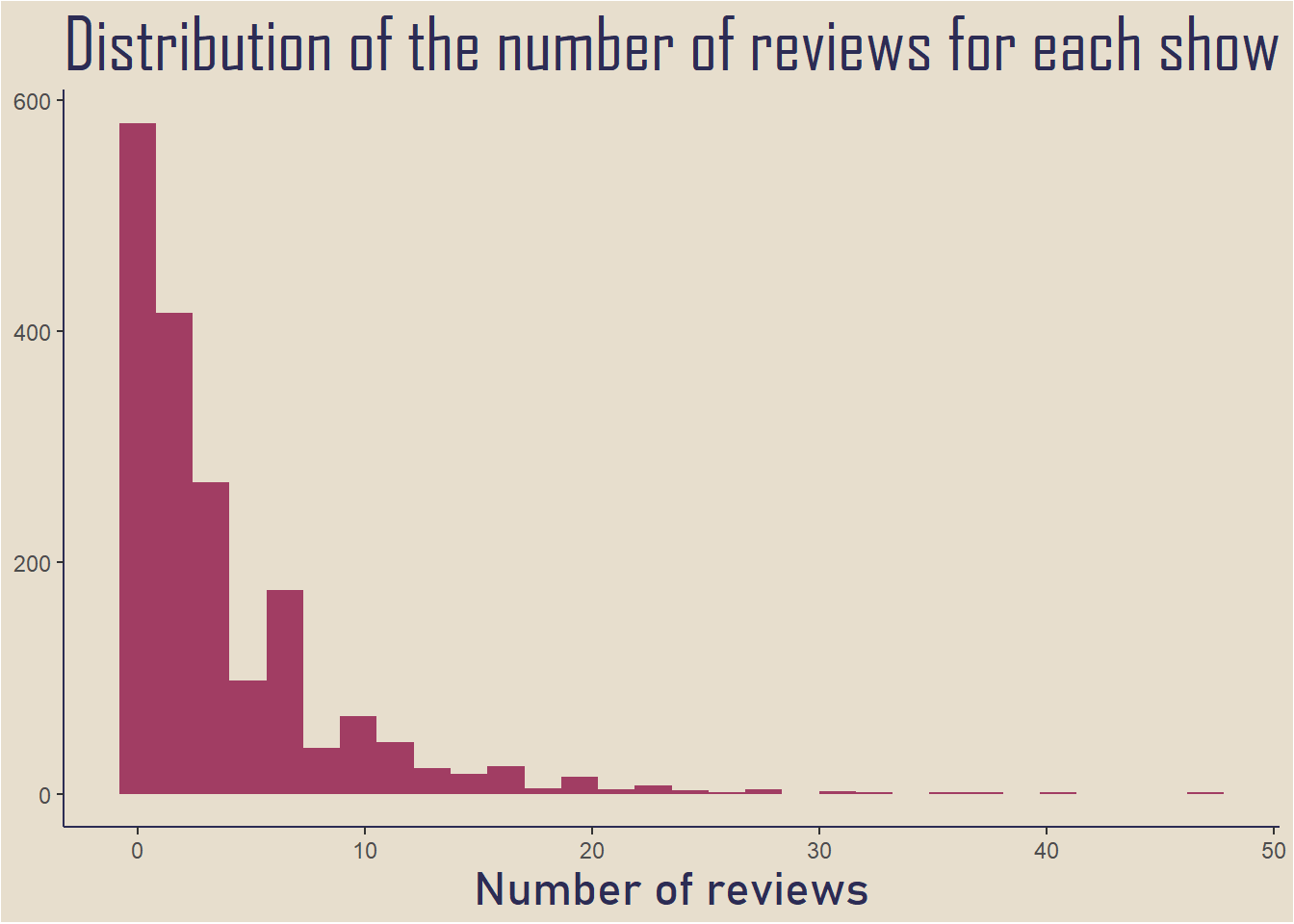 Ouch. The most common outcome is for a show to be unreviewed. Quite a lot of shows get one or two audience reviews, but this drops off quickly. Despite this, there are a few outliers, with a handful of shows getting over thirty reviews.

I thought it would be interesting to look at the number of reviews across the different show categories. People often associate the Fringe with comedy in particular, as well as theatre, but there’s also dance, music and spoken word, among other things.

I looked at the median to avoid any categories getting too skewed by unusually highly-reviewed shows. 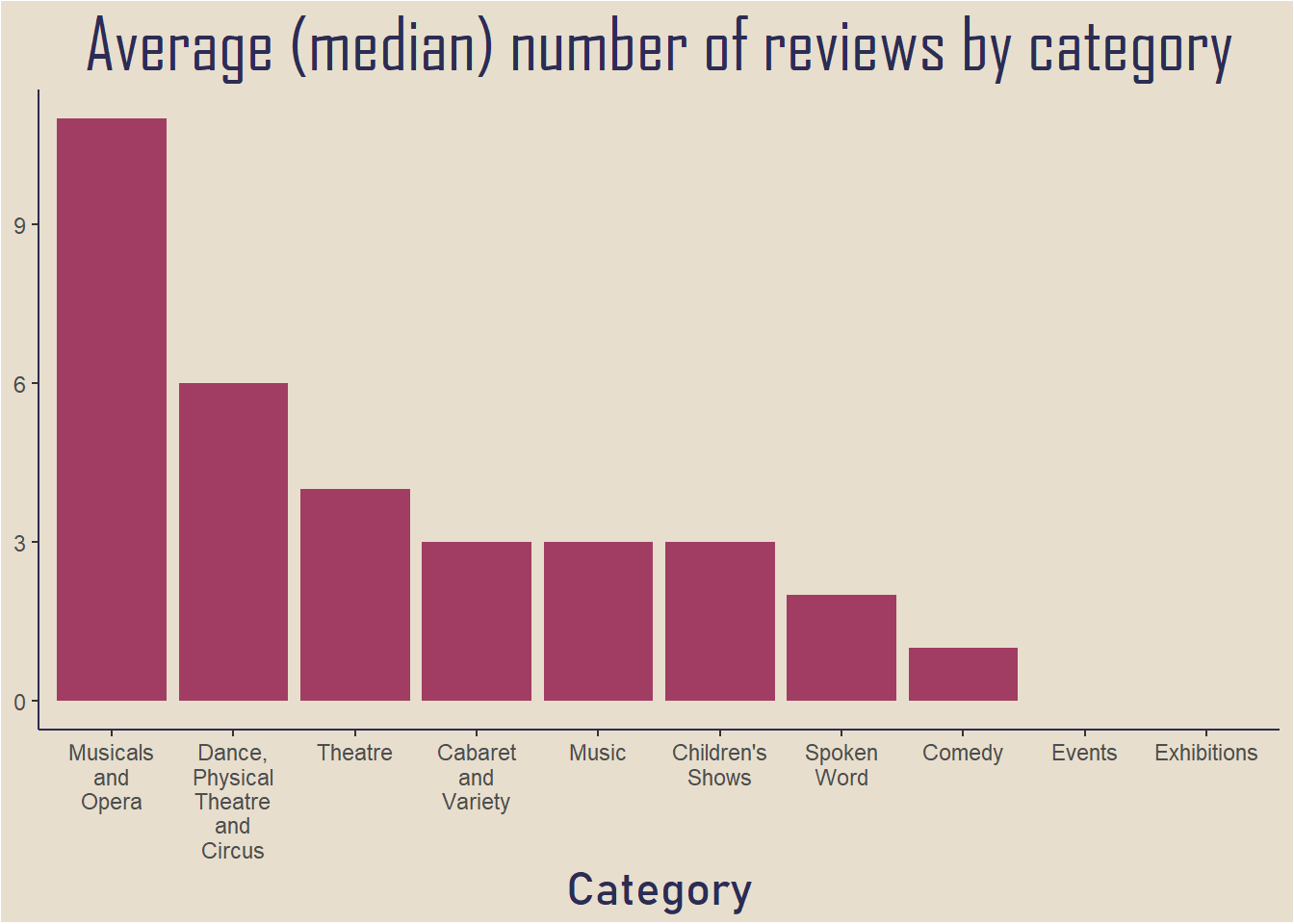 Musicals and Opera have a pretty incredible result, with the median show getting 11 reviews. At the other end of the scale, both events and exhibitions were getting a median of 0 reviews, but I think that says something about the slightly different space those sit in compared to shows.

What surprised me most about this was comedy - only 1 review for the median comedy show, even though comedy is so associated with the Fringe. I wonder if this is actually part of the reason; there are 996 comedy shows in this dataset, more than double theatre’s 416, the next highest number. With that much choice, are comedy shows getting lower audiences? Or is it just tricky to review comedy?

The place to be

Finally, I wanted to look at venue, because this is a really important decision for shows. Different venues command dramatically different price tags for putting on shows, so it’s worth knowing which ones are getting a reviewing audience in.

This required some extra data cleaning, because although my data had venues, I wanted to group these into venue brands rather than individual venues. After all, there are hundreds of places putting on shows in Edinburgh in August! I’ve also then narrowed it down to venue groups showing at least 30 shows with full runs.

Rather than just show the median, I’ve used boxplots here to show the spread of reviews across each group’s shows. 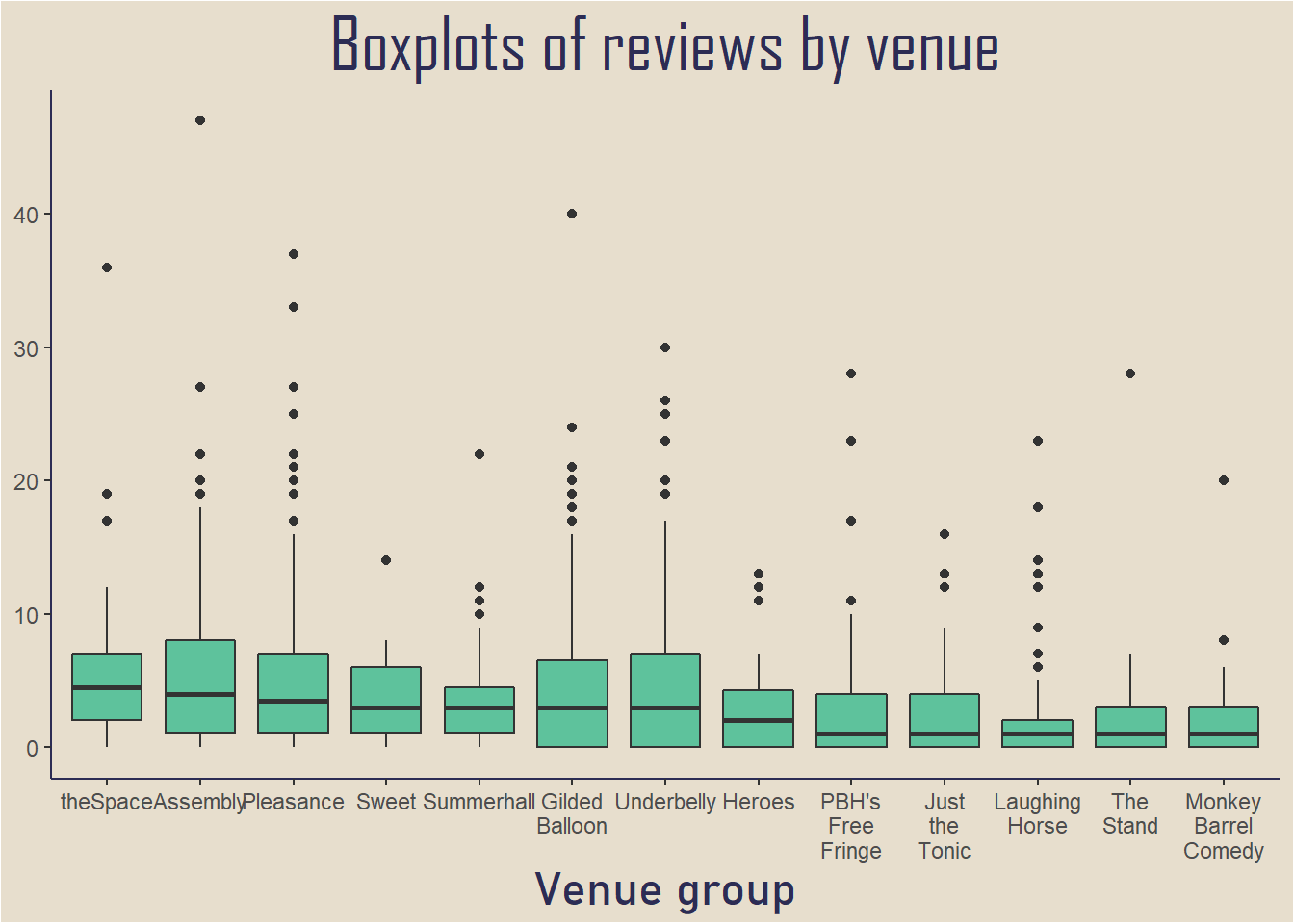 If you know your Edinburgh Fringe venues, you’ll see this correlates with the previous analysis. Comedy venues are nearer the bottom here. It might be of interest to performers to compare the relative positions of the big four paid venue groups: Assembly, Pleasance, Gilded Balloon and Underbelly. This also shows, however, that there is quite a spread across most venues, so venue alone is probably not the key to lots of or no audience reviews.

This stuff is interesting, but all press is not necessarily good. In a future post, I plan on using sentiment analysis to find the best-reviewed shows of the Fringe 2019, and look at how positive reviews are distributed.